A conference on the craft of writing for writers of all genres and all levels of accomplishment.

Registration & Programming information are available on the WC2 website.

I’ll be presenting on a few of the panels on Saturday the 28th.  The topics I’m discussing  include: Help My Laptop Has Fallen Over & Can’t Get Up! (Dealing with Writers Block), Things I Wish a Pro Had Told Me When I First Started Writing, Creating Unique Characters  and Keeping Them Fresh.

And for those interested in getting a signed copy of my latest release, ELFKIND, I’ll have copies available throughout the day.  You can get one from me, and I’ll sign it for you.

My publisher, Hunt Press, will be there as well, so all you writers and aspiring authors should definitely check it out.

I’m really looking forward to it.  I hope to see some of you author types there as well!  =)

How do you spell Triskaidekaphobia?… Memorial Day Weekend at BayCon in Santa Clara, CA

At least, that’s what I found myself asking over the holiday weekend.  I’m not sure I ever gave myself a satisfactory answer…

I’d been looking forward to BayCon for months, given that my GLAWS author friends go on and on about the event with glowing excitement, especially regarding the BayCon goers who tend to be avid readers and SF/F/H aficionados.

In other words — the BayCon peeps are my kind of peeps.

I dare say, the convention did not fail to live up to their praise, despite the unfortunate drop in attendance due to a rash of newly competing conventions in the Bay area over the holiday weekend.

I spent most of the weekend manning the signing table, meeting lots of fun and interesting people, and sold a respectable number of books, book bags and T-shirts.  My favorite visit was from Wiggles, the trained assitance pup — a sweet little black lab who reminded me of my childhood pet, Lady.

Saturday night was awesome.  After the Dealer Room closed, I found myself immersed in Star Trek culture, complete with drinks at the Klingon bar, a Klingon slave auction, and even Captain Kirk on the sales block.  All the money collected went to charity, including the $5 I threw down for a drink called “Revenge” served to the tune of a room full of Klingons shouting, “Revenge is a drink best served cold!” 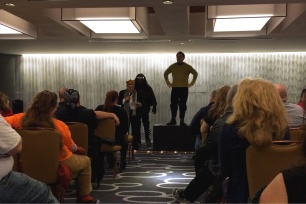 I even got to enjoy some Taiko drumming!

I will definitely be back next year if they’ll have me.  =) 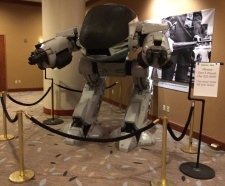 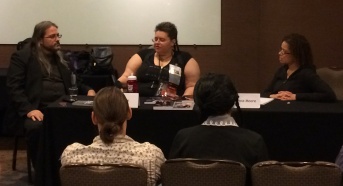 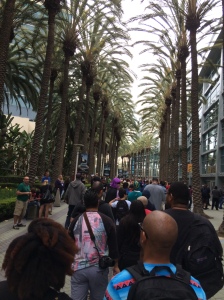 Another wonder-filled weekend in Anaheim…

WonderCon 2014 seemed so much larger than it did in previous years.  It’s just a matter of time before it’ll be as difficult to score an Anaheim ticket as it is to score one for San Diego.  It’s no longer the well-kept secret of San Diego refugees.  That, or there are just so many more of us shut out of the San Diego con, despite our hours lurking in the virtual waiting room on ticket-purchasing day.

A huge, heartfelt thank you to my dear friend Rebecca for my San Diego ticket this year.  It’s been 6 years since I’ve been able to get in.  I can hardly wait.  She was the first one to go with me so many years ago.  It’s apropos she’s the one to help me get BACK IN.

Meanwhile, WonderCon was a completely different experience for me this year, because I spent half of it behind a book signing table.  The whole weekend was a payoff for all of those grueling hours I spent working on ELFKIND.  I felt as if I’d finally grasped some of the stars I’ve been reaching for.

Thank you to my friends, and everyone else who stopped by to say “hello”!

Most memorable was the Salem panel, complete with Shane West (nice!) and the show runners, Adam Simon and Brannon Braga, answering questions and giving us a sneak peek at the new WGN series.  I’ve since been watching it air on Sunday evenings, and I’m truly impressed with the writing.  I’m pleased they are incorporating so much research into the dramatization.  The actors are amazing, bringing it all to life, with fabulous costuming and dark, gritty cinematography.  I’m crossing my fingers they get a second season!

Any other Faceoff fans out there?  I’ve been watching this SyFy show from its inception.  Cat and Nico were on the most recent season.  They were at the con, showing off their skills, and I even got a fun greeting from Nico, who almost made it to the finale show.  Both he and Cat are impressive artists.  I enjoyed watching them on the show, and now I can say I watched them live in action as well!

I squeezed in the Nerdist Panel and a visit to the Nerdist booth, since I’m always all about Chris Hardwick and company.  Unfortunately, I didn’t get his autograph due to my own book signing commitments, but I got one from Jessica Chobot. Yay!   =)

Star Wars definitely represented this year, including a visit from my friends, The Darkside Riders!

And of course the Dealer Room abounded with excitement as it always does.  Some of the shots I collected are down below, including one of the artist who created the little Minion I took home with me.    =)

That’s what I did this weekend.

“Sleep?” you say.  Not much really.  A friend recommended a good migraine medication.  We’ll have to see how that goes!

I’ve waited years to be able to say: I got my editorial letter this week!  The timing is, of course, impeccable.  Given my grueling work schedule, not to mention everything else on my calendar these days.  There was little time left for sleep amidst all the editing but excellent progress was made.  Elfkind is shaping up to be a terrific story!

I brought my editing with me to the GENRE-LA writers conference on Saturday.  There were some great panel discussions, and I wished I was able to attend all three days.  We missed you, David Gerrold, and hope you feel better soon! 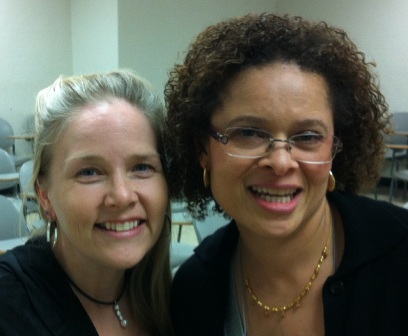 The keynote speech by Gene Del Vecchio was fascinating: Creating Blockbusters!  How to Generate and Market Hit Entertainment for TV, Movies, Video Games and Books.  If you’re a writer, I recommend you check it out.

Some noteworthy panel topics included discussions on blurring the lines between Hero and Villain, Crafting Sci Fi versus Fantasy Worlds, A Pinch of Improbability – A Dash of Imagination,  and Mind Blowing Plot Twists & Dropping Clues.

Thank you to Tony N. Todaro and the GLAWS event staff for a wonderful event.