I began my Steampunk weekend with a selfie in the hotel.  Which means I must have been excited, because I don’t usually flip the phone on myself.  I prefer to be on the other side of the lense, in search of interesting things to shoot.

The best part of the weekend was running into my friends here and there, some of whom even stopped to pose for pictures in their fun and fantastical garb.

One of my friends, Richard Foss, broke down the ins-and-outs of Victorian food and libation.  He’s an amazingly informed foodie and food critic, as well as a talanted author in his own right.  I could listen to him lecture for hours.

Speaking of authors, there were fewer writer panels at the convention this year, sadly.  So I sat in on some costuming discussions before getting to watch some terrific writers discuss the Steampunk genre.   Followed by my favorite part of the weekend — a writers’ workshop with Todd McCaffrey and Dru Pagliassotti.  And of course, getting my books signed by them and Cherie Priest.

Of course, Dealer Room antics abounded all weekend.  And I did end up spending some money… But can you blame a girl when all the booths looked so inviting with their gadgets and whats-its, doo-dads and feathered thing-a-ma-jigs?  And I’d be remiss in my duties as a shopper if I neglected to mention all the pretty attire!!! 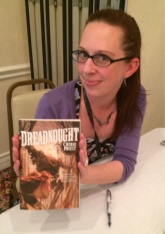 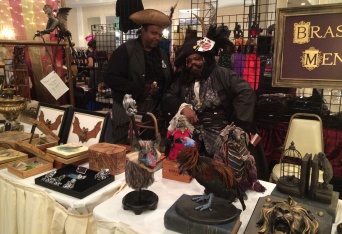