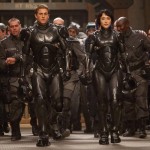 I was really excited to hit the Con on day 2.  It was even crazier on the Exhibit Hall floor, and the Arena was packed.  I started the day up on the 3rd floor with a panel for History Channel’s new scripted program, Vikings.

Folks, I freaking LOVE this show so much I skipped a bunch of autograph opportunities and a Hobbit panel to see the amazing cast up close and personal.  A huge THANK YOU! to History Channel for creating this terrific exploration of some of the historical figures of my own personal ancestry, their culture and its mythos.

When I was in Norway, I spent a lot of time in the Viking Ship Museums in Oslo.  This show brings this heritage to life against the compelling dramatization of Ragnar Lothbrok’s exploits in 9th century Scandinavia.

And no wonder this show is good.  It’s created and written by none other than Michael Hirst, who is also responsible for bringing us Elizabeth and The Tudors.

Up next for me was a true Mad Genius… Guillermo del Toro.  I’ve always considered him an inspiration to aspiring authors, producers, creators et al.  He never disappoints if you’re lucky enough to see him speak, and I’m not just talking about the amazing sneak peeks he brings with him.

The first time I saw him in San Diego, it was as if he was talking right to me, at a time when I was utterly discouraged with the publishing industry and ready to quit writing.  He said, You cannot let anyone else tell you what story to tell.  It has to come from your heart.  It has to mean something to you or it will never mean anything to anyone else.  His words, his passion and the timing of it all made me cry.  And because of him, I’m still writing almost every day.

Thank you, Guillermo, from the bottom of my heart, for restoring my passion with  your words and your creativity.

Pacific Rim: I AM SO THERE.  IT’S GOING TO BE AWESOME!

In fact, according to FirstShowing.net, 2013 is going to be a HUGE year for Sci Fi in general.  I couldn’t agree more, and I’m absolutely thrilled about it.

The Revolution cast made an appearance to promote their season on NBC.  I’ve not seen the show yet but what I saw and what I’m reading is good.  I’m going to have to check it out.

I’ve been waiting (im)patiently for Cassandra Clare’s book turned film, Mortal Instruments, City of Bones.  I still need a signature in my 1st ed. hardcover BTW, so I guess I’ll have to troll for signings in the LA area while I wait for the movie to finally open.

We got to see a special extended trailer at the con, and it was awesome.  I think I’m really going to enjoy this movie as much as I enjoyed the book.

Then Bruce Campbell stepped out on stage to a standing ovation.  He’s done so much for Geek fandom throughout his career it’s hard to narrow it down.  All I can say is… I had to watch the new Evil Dead trailer from between my fingers.  Wow.  To the Horror fans out there, you’re in for a real treat.  This is not your grandmother’s Evil Dead!

Fede Alvarez did it right.  There’s no CGI here.

This is the End!…

Our friends Seth Rogan and Evan Goldberg came out to promote their new end-of-the-world parody, This is the End.  It’s packed with cameos from all kinds of fun actors, including our Harry Potter darling, Emma Watson.  It stars Jonah Hill, James Franco, Seth Rogan, Danny McBride, Craig Robinson, and my Train Your Dragon/Sorcerer’s Apprentice favorite – Jay Baruchel.

Yet again I finished up the convention for the day with a round of perusing in the Exhibit Hall.  Saturday is always the best day for people watching and costume envy…

Artist Alley was awesome.  Check out my write-up on that here… ARTISTS’ ALLEY!

Star Wars, Battlestar & Batman… Oh my!  Check out my write-up on that here… EXHIBIT HALL!